How can Blockchain help charities?

Blockchain technology can facilitate trustless consensus across all industries. Amber Magson (Yr12 student) whilst on Work Experience from the Bishop Stortford College decided to look into how Charities can benefit from this technology and Ethereum's Smart Contracts.

What is Blockchain and how does it work?

The anonymous and mysterious Satoshi Nakamoto, who created the bitcoin whitepaper in 2008 was the first to use blockchain technology. Blockchain can be explained as a digital ledger where transactions which are stored using cryptography and are recorded chronologically in blocks in the database that is readily available to everyone. The advantage is that the system is decentralised. This means that it is not owned or operated by any one person, so transactions work on a peer-to-peer network basis. All recorded data is protected by cryptography and algorithms making it immutable, which prevents editing, unauthorised changes or tampering. However, errors can still occur at the point that code is implemented on the blockchain if it is incorrect! 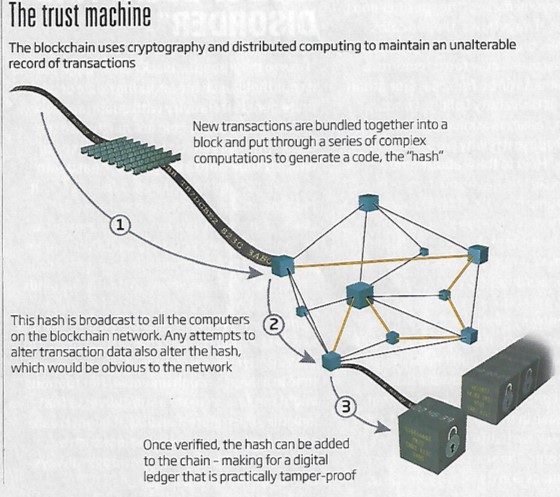 How can it help charities?

1. Transparency- Donors can track how their money is being spent by charities

When charities use blockchain technology, donations can be tracked so that donors can see where their money has been spent. This creates 100% transparency as they can see instantly how their donations are used and even choose to receive a refund if the charity fails to achieve their specific goals.

2. Security and traceability- Reduces loss of funds to corruption

In 2012, Ban Ki-Moon (the then secretary of the UN) estimated that 30% of development aid was lost to corruption. By using blockchain, donors are able to ensure that the money donated is not lost or wasted.

Using blockchain technology means that money will not be lost due to banking fees or poor exchange rates when transferring money across countries. This will be particularly useful for foreign aid donations.

St Mungo’s, whose main aim is to help homeless people in London are the first ever charity to use blockchain technology to encourage donations. In order to do this, they have partnered up with a platform called Alice, which is built on the ethereum blockchain. It runs the charities fundraising appeals and works by freezing donations by the use of smart contracts until the charities can provide evidence that its goals have been met. It then allows donors to track how their donations are being used and they are also kept up to date on the progress that the charity has made. If the goal is not achieved the money is given back to the donor. In theory, this should increase donations because it creates greater trust through transparency of where the money is.

Another company called Humaniq, is also based on the ethereum blockchain with 382,276 users. According to the World Bank’s Global Financial Inclusion Database, there are currently 2.5 billion people on Earth who do not have access to official financial services. It works as a mobile wallet for transactions and storing Humaniq coins (HMQ). As a reward for downloading the app you are awarded $20 worth of HMQ, the app is available on android mobile phones but not yet on the UK app store. The app uses both face and voice recognition which makes it quick and easy to set up but unfortunately makes it vulnerable to hackers. There main focus is on the developing world to people who currently do not have access to official financial services.

What are the possible risks associated with using blockchain?

One danger associated with using blockchain technology within charities is that cryptocurrencies are extremely susceptible to price volatility.  This means that a donation one day may be a completely different value the next. This is good if the value increases but not so good if the value decreases. As charities do not have the luxury to wait for the price to go back up they could risk losing a lot of money. Blockchain technology is still in relative infancy and needs to overcome scalability issues. Cryptocurrencies such as Ethereum can only manage 20 transactions per second and bitcoin 7, compared to mainstream payment transactions such as visa, which can do 1667 transactions per seconds.

In conclusion, I believe that charities that use blockchain will see an increase in their donations because donors have more confidence seeing directly where their money has gone and how it has helped. However, until cryptocurrency gains price stability it is too great of a risk for charities to use. Hence, it will be interesting to see if blockchain becomes a main influencer of the charity-sector in the future.

For more articles on blockchain and more of an introduction on bitcoin see previous articles; ‘Blockchain: the next blockbuster?’, ‘Will blockchain continue to disrupt?’, ‘Bitcoin is to Gold what Ethereum is to the Internet’, ‘Bitcoin – Boom or bust?’, ‘Confused by cryptocurrency? Bemused by bitcoin? Baffled by blockchain?’