Bitcoin is to Gold what Ethereum is to the Internet

Whilst on internship Gary Kirby from the University of Leeds continued the 'chain' in the series of posts on cryptocurrencies and blockchain. 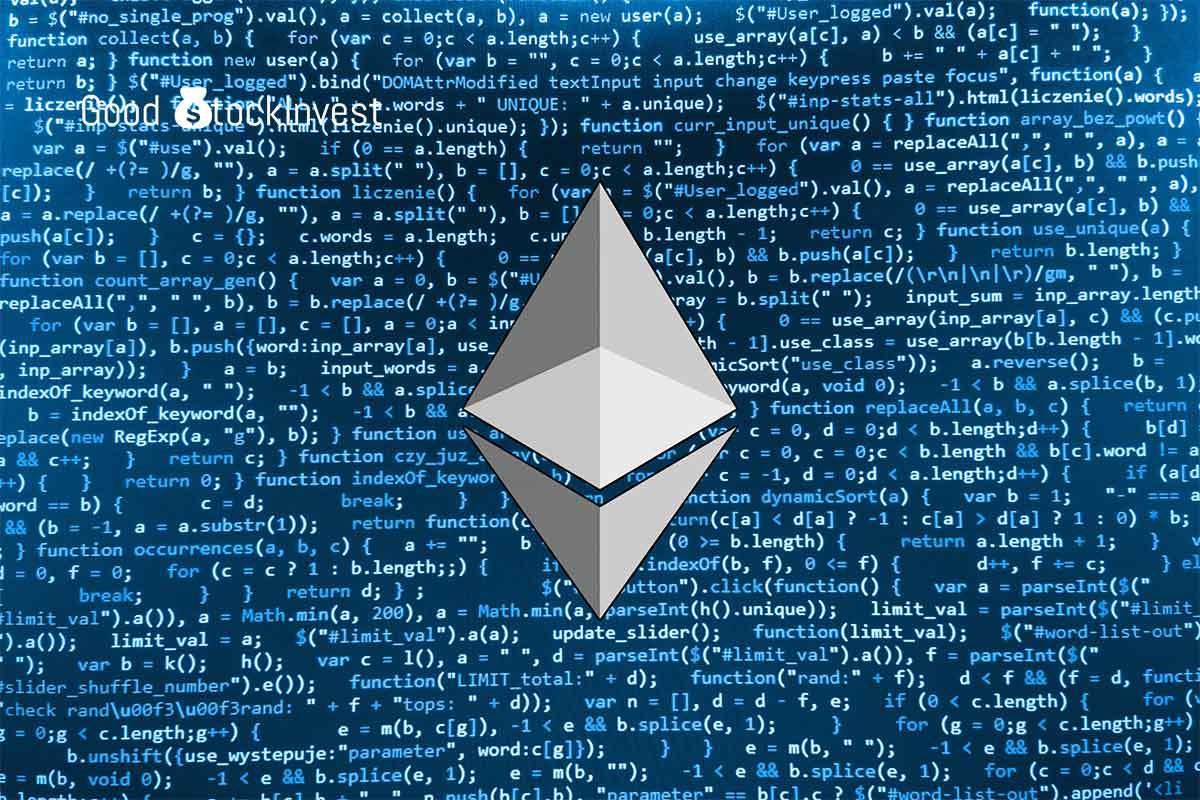 Despite some scepticism, cryptocurrencies and blockchain have gained a significant amount of attention since the creation of Bitcoin in 2009 and its value token, bitcoin (with a lower-case b). It would appear that much of this scepticism has worn off in the last few years, and cryptocurrencies are beginning to establish themselves as highly credible and perhaps even superior means of payment to the traditional ones we are used to. This is primarily due to their use of blockchain, which has been discussed in detail in previous posts including ‘Confused by cryptocurrencies? Bemused by Bitcoin? Baffled by Blockchain?’, ‘Will Blockchain continue to disrupt?’, and ‘Blockchain: the next blockbuster?’

In short, Blockchain is decentralised, immutable ledger. In plain English, it is a secure and distributed record of digital transactions, allowing for consensus between relevant stakeholders, without any middle man. Blockchain is, however, not limited to dealing with transactions, and the likelihood is that because of the multitude of possibilities and benefits that blockchain presents, it is only a matter of time before blockchain plays a prominent role in our lives.

What are ether and Ethereum?

“Ether is a medium that permeates the entire universe, in itself is invisible but it provides a global reference frame – a base layer that the universe runs on” (Vitalik Buterin – Ethereum’s creator describing why he named it ‘Ethereum’).

Ether is a Cryptocurrency (digital currency) like bitcoin, but is a value token of the Ethereum blockchain. Ether simply plays the role of a fuel for the Ethereum network, to incentivise developers aka ‘miners’ to complete transactions. (Mining is the process in which value tokens are released to the miner in exchange for compiling transactions into blocks which are subsequently added onto the blockchain). You could think of it as being a bit like a stamp. The postman’s not going to post your letter without it. The Ethereum blockchain does not only provide decentralised value via ether. In essence, Ethereum is a decentralized platform for applications that run exactly as programmed without any chance of fraud, censorship or third-party interference. Think of it as decentralised global computer¬ – and it has massive potential.

How does Ethereum differ from Bitcoin?

As the blockchain for a cryptocurrency, it is easy to assume that Ethereum is just another Bitcoin, but with a different name. But, in the same way that both Snapchat and LinkedIn both function using the internet to allow people to communicate, they are different in that they have very different uses.

This is probably the most important distinction to make – Bitcoin and Ethereum differ in both purpose and capability. 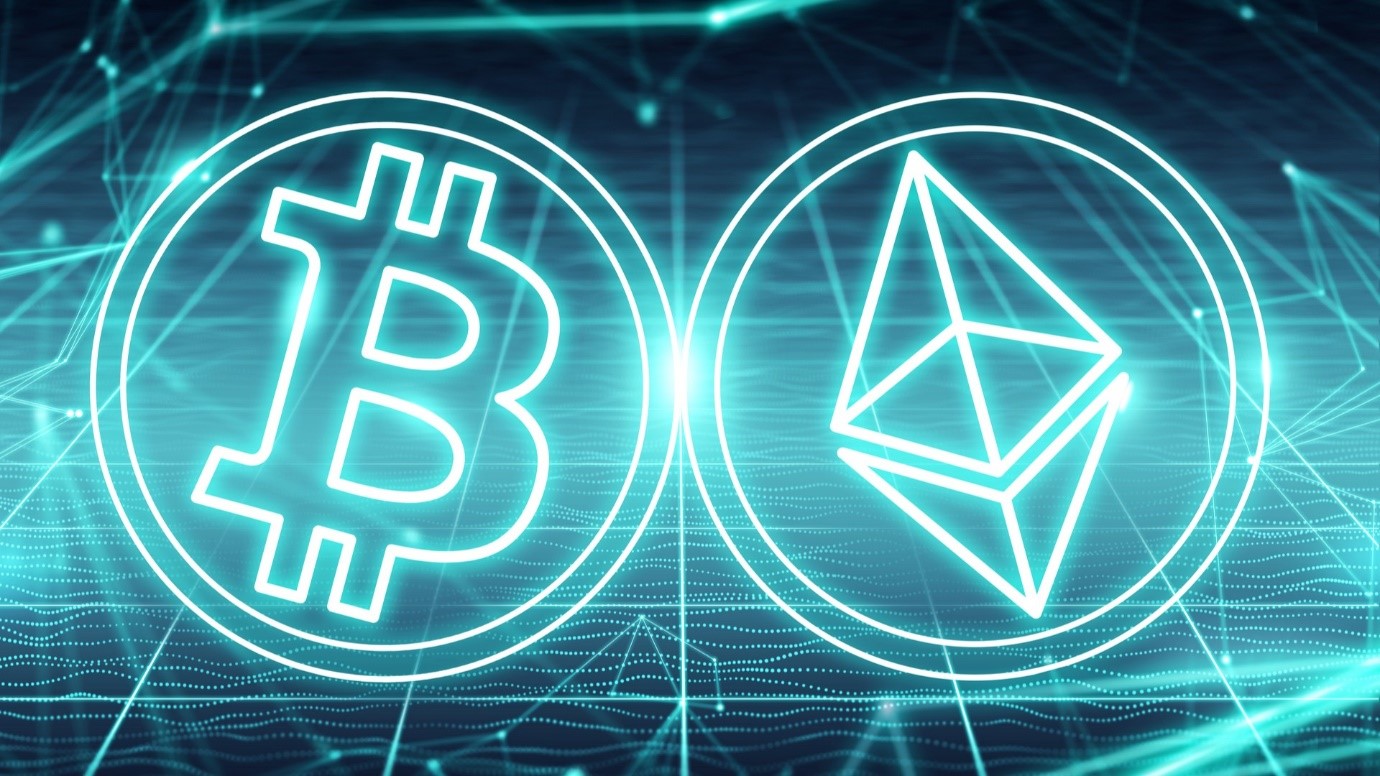 Before the creation of Ethereum, blockchain applications were designed to do a very limited set of operations. For example, Bitcoin was developed exclusively to operate as the platform for a peer-to-peer digital currency. But whilst all blockchains have the ability to process code for other applications, most give a set of limited operations.

The problem is, Bitcoin has a cap of 1MB on the amount of data processed by the Bitcoin network every 10 minutes, and has maximum of 7 transactions per second. Furthermore, its code is simply too complicated to gain traction amongst developers, and at an average transaction fee of 5%, it is quite expensive. You’ll also have to wait on average 20 minutes for your transaction to be confirmed.

As a result of these apparent limitations of Bitcoin, developers had the choice to either expand the set of functions of Bitcoin (at great expense, effort and time), essentially building on top of the Bitcoin blockchain (look up Litecoin, Zcash and Monero for more on this). Or, develop an entirely new blockchain (as Vitalik Buterin did) in the process creating Ethereum – A blockchain with a simpler code, lower transaction fees (0.38%) and quicker settlement times (around 40 times faster than bitcoin). It also allows developers to create whatever operations they want, essentially meaning that they can build thousands of different applications beyond anything we have seen before.

Currently, ether sits behind bitcoin as the second largest market cap cryptocurrency. It is, however, expected to overtake bitcoin in the future, despite thousands of dollars’ worth of ether being stolen last year (2016) by hackers (perhaps a source of the scepticism mentioned previously). Advocates for ether suggest that it will overtake bitcoin as the most valuable cryptocurrency since it’s blockchain (Ethereum) is superior to Bitcoin. 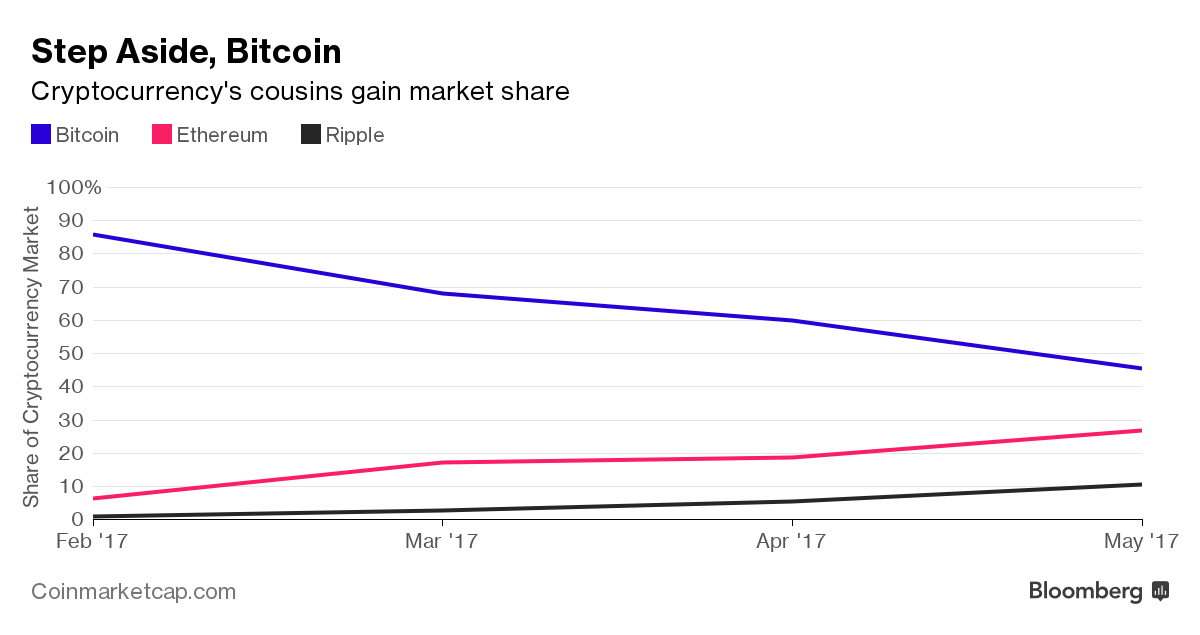 As of June 2017, ether has seen more substantial increases in its value rising by 5000% since the start of the year. This is compared with bitcoin’s 300%, which is itself, an impressive increase in value. Following such rapid growth in ether’s value, it is unsurprising that some suggest we will only have to wait until 2018 before ether’s value exceeds that of bitcoin.

So why hasn’t Ether already taken the number 1 spot?

In fact, there are hundreds of other cryptocurrencies in existence, more commonly referred to as Altcoins (which includes Ether, Ripple, Litecoin, Dash, Zcash, Monero and many others). Many of them market themselves as superior cryptocurrencies, highlighting that they solve a perceived limitation of Bitcoin. As a result, we have ended up with quite an eclectic mix of Altcoins in the world of cryptocurrencies.

Nevertheless, as the pioneer in cryptocurrencies, bitcoin has been able to benefit from the ‘first mover’ advantage. Combined with having been around for almost a decade (whereas Ethereum was released in 2015), this is likely to be the source of bitcoin’s dominance so far. It should be mentioned that although bitcoin’s 300% growth is dwarfed by ether’s 5000%, one bitcoin is still worth approximately 10 times the price of an ether.

How many times have you made a purchase for a good or service using a cryptocurrency? As it stands, cryptocurrencies appear to be a bit of a niche topic, understood and used exclusively by the small group of people with the relevant knowledge. For cryptocurrencies to really take off for use by the everyday person, this probably needs to change. There is however, another issue that has caused some debate within the cryptocurrency world. Decentralisation is central to the concept of blockchain – its security and the security of its transactions depend on it. But scaling up the use of blockchain puts its decentralisation at risk. For example, more than 60% of bitcoin mining is done in China, and ultimately, miners have the choice over which transactions they compile into blocks. The debate is whether to scale up blockchain applications such as Bitcoin but potentially at the expense of their decentralisation (because miners are subject to laws imposed by their government). The outcome of this debate is likely to determine the future of blockchain technology. Ethereum is, on the other hand, more scalable than bitcoin because of the way in which it is mined. Consequently, as is often the case for ‘first movers’, the second mouse ends up getting the cheese (look up ‘Book Stacks Unlimited’ then compare it to ‘Amazon.com’ for an example). In 4-5 years’ time, we may look back at Bitcoin as being a key stepping stone towards the use of blockchain technology, with bitcoin itself having lost relevance – Only time will tell