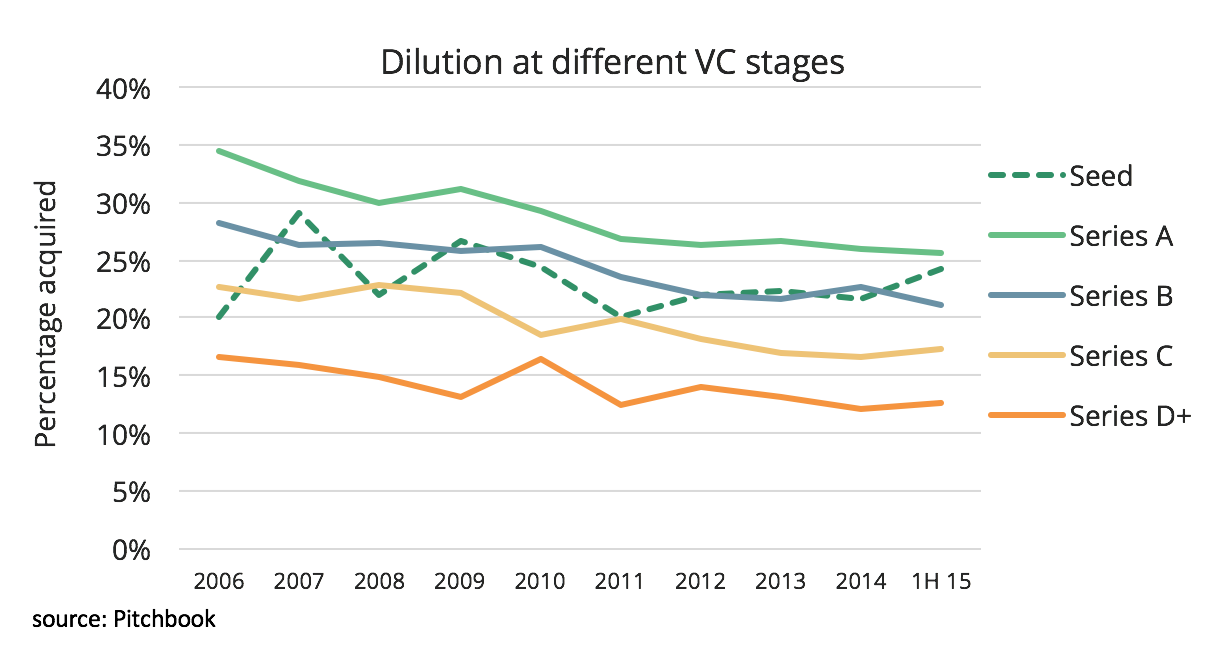 Fundamentals do matter, of course. A company needs to be forecasting at least high double digit growth in revenues in its early years with a plan to reach profitability but beyond that Go4Venture provides us with a widely used rule of thumb:

Then, a pre-money valuation can be derived from the funds raised (N) and the dilution percentage (D) as (N/D)-N. The data below shows median valuation and dilution for VC funding deals in the US in 1H15 and was collated by Pitchbook.com.

In practice, many seed rounds are carried out under the VC radar by angels or friends and family. This explains why the Pitchbook seed round valuation looks high to us and we would expect the majority of seed fundings to be carried out in the $1-5m range.

For a technology company, Go4Venture notes that typical milestones at each round could be:

The valuations and the timing of rounds will depend on the type of company. Internet B2C businesses can scale internationally much more quickly, which often compresses the time frame for Series A/B and can boost valuations. Similarly, in an upswing there is a tendency to reduce execution precautions and companies may seek finance to either outspend competition (e.g. Uber), gain first mover advantage in all countries (e.g. Rocket Internet) or accelerate growth through acquisitions (e.g. Fab.com). Management need to ensure the milestone is deliverable with the funds raised to enable future rounds.

If we assume three venture rounds followed by an IPO, 30% dilution is about the “right” level to ensure that the founders of the business remain motivated. Much higher and their stake in the business at exit becomes too small, much lower and it may be difficult to raise the required funds at each stage of the business’s development.

There is no right valuation

Early stage company execs often ask us what their business is worth and while we can attack the question in many ways and give scientific sounding answers, in truth there is no right valuation and anyone who tells you there is is probably pitching for business with you to raise funds. As an old banker colleague put it, pitching to win business is poetry, doing the deal is prose. Oakhall helps companies size their markets, model their businesses, and prepare their fund-raising pitches.