AI Composers: Destroying History Or Bringing Music Back To Life?

AI composers have been used in recent years to produce music. Whilst on work experience Anqi Huang (Year 11 student) from Bishop's Stortford College explored how AI composers are used in classical music and opinions regarding this topic. 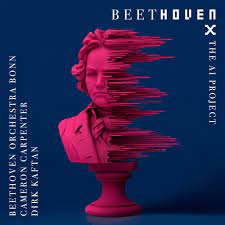 As you may know, technology plays a huge role in music. For example: synthesisers, loops, over-dubbing all in modern music.

Since classical music is in the past, many great composers have died and especially in the poor hygiene in the years 1600-1900 it’s not surprising that most composers didn’t live long. Thus, it’s a shame some were unable to finish the works they began, notably Schubert’s Unfinished Symphony and Beethoven Symphony 10.

Since then, there have been many attempts to finish these symphonies. For example, in honour of the 100th death of Schubert, the 1928 international Columbia graphophone competition was held to encourage composers to complete the ‘unfinished’ symphony. But a human is just not as good as a machine in identifying patterns and creating something that is most like what Schubert himself would have written, as they themselves are likely influenced and fuelled by their own ideas.

In 2019, using the power of AI, Huawei taught its Mate 20 Pro smartphone - which has in-built advanced technology designed to complete AI-based tasks - to compose the third and fourth movements of Schubert’s famously ‘Unfinished Symphony’ with the help of composer Lucas Cantor. This was achieved by engineers feeding music in the form of data into the phone’s dual Neural Processing Unit, so the AI had information about the timbre, pitch, and meter that Schubert liked to use to his melodies. Then the AI would create melodies from the information and Cantor would choose his favourites. Then he orchestrates them and turns it into the final two movements to complete the symphony. More than 500 people travelled to London from all over Europe for the one-off performance of the completed piece.

Huawei says its ‘goals are to digitally connect every single person, home, and organisation around the world. We want innovations to be meaningful so we’re harnessing the power of AI alongside human expertise to make a positive impact on people’s everyday lives.’ Therefore, they took on the task to complete this symphony.

Huawei has said that by completing one of the most iconic unfinished symphonies of all times, it has’ set out to honour Schubert’s legacy as well as taking inspiration from his pioneering spirit, by using the power of AI to finish the Symphony No.8 in the same style that Schubert started it.’ And some people do share this mindset.

In the same year, Beethoven’s symphony 10 was also being completed by AI, but this time there were only fragmentated sketches. It took over 18 months for the artificial intelligence to construct and orchestrate two entire movements, each over 20 minutes and it “was a tremendous challenge. We had to teach the machine how to take a short phrase, or even just a motif, and use it to develop a longer, more complicated musical structure, just as Beethoven would have done,” Dr Elgammal explained.

Dr Elgammal, professor at the Department of Computer Science, Rutgers University, and lead computer scientist on the artificial intelligence project, explained in The Conversation that in order for their project to go further, the team “had to use notes and completed compositions from Beethoven’s entire body of work – along with the available sketches from the Tenth Symphony – to create something that Beethoven himself might have written”.

Dr Elgammal further explains “the way music generation using AI works [it] is very similar to the way, when you write an e-mail, you find that the e-mail thread predicts what’s the next word for you or what the rest of the sentence is for you.”

Carey continues explaining, “but let the computer predict your words long enough, and eventually, the text will sound like gibberish.”

Dr Elgammal carries on “it doesn’t really generate something that can continue for a long time and be consistent. So that was the main challenge in dealing with this project: How can you take a motif or a short phrase of music that Beethoven wrote in his sketch and continue it into a segment of music?”

Carey then says, “that’s where Werzowa’s daily e-mails came in. On those early mornings, he was selecting what he thought was Beethoven’s best. And, piece by piece, the team built a symphony.”

They went through tests to try perfect this work. The first test was to see if an audience of experts could determine where Beethoven’s phrases ended and where the AI extrapolation began. When they couldn’t, the team knew they were on the right track.

Even though the tickets were sold out for the premiere in 2021, there was a pushback.

So, was it worth this amount of time, work, and difficulties when others aren’t willing to accept this?

“There are those who will say that the arts should be off-limits from AI, and that AI has no business trying to replicate the human creative process,” Dr Elgammal says in The Conversation, “yet when it comes to the arts, I see AI not as a replacement, but as a tool – one that opens doors for artists to express themselves in new ways.”

However, many people are reluctant to the idea of AI composers. The closest the compositions completed by AI can be, it would still not be anywhere close to what Schubert or Beethoven would have produced. Beethoven himself said, “What you are, you are by accident of birth; what I am, I am by myself. There are and will be a thousand princes; there is only one Beethoven.”

Furthermore, composers evolve, they improve. They’re ever changing and learning how to be better composers. This especially applies to Beethoven as he was on the brink of classical and romantic time period. He broke boundaries composition after composition so it’s difficult to know what he would have written. Also, it’s hard to tell what Schubert wanted or wanted to change as he had abruptly stopped writing this symphony after starting the third movement and left it in 1823 until he died in 1828. Additionally, composers captured their emotions or ideas into their composition, and you don’t know what their intentions for this particular composition really are. And to add on, they were alive nearly 200 years ago. Is it possible to understand what they wanted to write?

Tim Höttges explained, “Beethoven lived in a society that was characterized by wars, by need but also by lots of love and empathy. Machines aren’t able to do that. However, the machine understands music and can develop it further, but it cannot integrate the zeitgeist – the topic at hand if you like – into the music.”

Lastly, humans aren’t machines, their creativity and work doesn’t exactly follow a pattern. Also, the composers who aided the AI has different taste to Schubert and Beethoven. They are picking what they like the sound of.

What could this mean for the future?

AI composers could mean more unfinished works are able to be completed.

Ultimately, most people are more willing to accept the brilliance of what we have rather than long for what we do not.