Updated: What contribution does immigration make to the UK economy and how does it affect our population growth?

Whilst on internship George Travell, student at The University of Leeds, updated Christopher Wilkin’s previous article on immigration.

Since 2010, the population of the United Kingdom has increased gradually with an average increase of 0.72% per annum. In 2010, the population according to the ONS was 62.76 million, but in just eight years, it has grown to an estimated 66.5 million. This increase is attributed to both natural increases and net migration. In 2018, the UK received a net gain of 283,000 people purely from migration. To put this into perspective, the UK received only 158,000 net migrants in 2000, and in 1990, there were just net 36,000 migrants entering our country. This demonstrates the huge increase in migration into the UK over the past few decades.  Natural increase in 2018 only added 142,000 people to the population in comparison leaving net migration accounting for 66% of the population growth.

The data also reveals that in 2018 immigration accounted for 66% of the population increase. Furthermore since 2014, immigration accounted for over half of the UK population growth (with the exception of 2016). Year on year changes since 2014 also show that natural increase has decreased by 3.3% compared to net migration which has decreased by 1.6%. The ONS also revealed that in 2018 18% of the UK is 65 or over compared to 15.9% in 2006 highlighting how the UK is getting older.

The data also shows the change in net migration to the UK from both EU and non-EU parts of the world. Unsurprisingly, since the creation of the European Union in 1993, the number of EU migrants entering the UK has increased exponentially, rising by 137% between 2010 and 2015 – more than doubling, making up the vast majority of the total net migration into the UK. In this same time period net migration from non-EU countries dropped by nearly 17%. 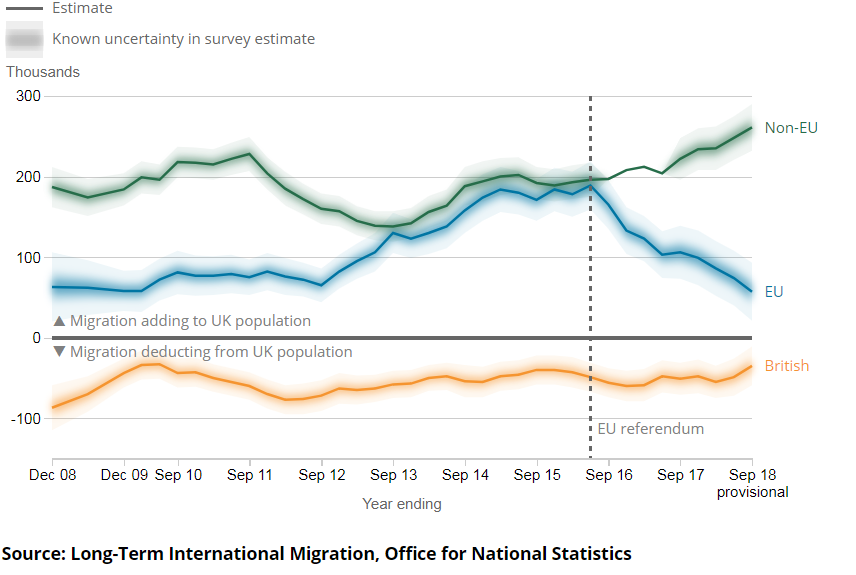 Since the Brexit referendum in 2016 these trends have reversed. Net immigration from the EU plummeted to just 57,000 - numbers last seen in the 1990s. Non-EU migration has increased from 115,000 in 2016 to 283,000 in 2018. It may be that these trends are unrelated but it seems likely. These numbers also suggest that even before leaving the EU, the effects on immigration to the UK are already being seen.

What is clear from the data is that the UK is nowhere near to meeting the immigration targets of “tens of thousands” pledged by successive Conservative-led governments since 2010.

The effects of immigration on the UK economy

Anti-immigration rhetoric has been rife leading up to the Brexit referendum however many myths have been perpetuated. One being that migrants come to the UK to take advance of generous welfare benefits; however, migrants who arrived after 1999 were 45% less likely to claim benefits than UK natives in the period 2000-2011. Moreover, a study by UCL revealed that between 2001 and 2011, A10 countries, the rest of Europe and non-EU migrants contributed, 12%, 64% and 3% more to the fiscal system than they took out. Another claim that immigrants do not create jobs and instead take jobs that would otherwise be available to UK citizens is also largely unfounded. Indeed, there is little correlation between unemployment and net migration, in fact, migrants increase real GDP, ceteris paribus, by increasing aggregate demand through consumer spending which in turn creates demand for more jobs. It should be noted however that the effects on GDP per capita is uncertain. Increased market flexibility brought about by migrants has also proven to be crucial for filling roles such as immigrants occupying semi-skilled jobs throughout the 2000s. As already stated, the UK is ageing - migrants tend to be in their 20s and 30s making them suitable to maintain the UK workforce.

One additional concern is that immigration can push down wages however this doesn’t have to be the case as immigration increases labour supply but also labour demand. Indeed, the Bank of England found that a rise in immigration of 10% caused wages to fall by 0.31%. For semi/unskilled workers in the service sector however saw a wage increase of 2%. The stagnation of real wages since 2008 is still the legacy of the financial crisis and not the effect of immigration. Indeed, migrants too will feel the effects of the recession and be more likely to be unemployed. Moreover, like British natives, they too can be left unemployed from structural unemployment if they are low-skilled.

To summarise, immigration makes economic sense provided the age and skills are appropriate and the UK economic climate is hospitable. Considering the UK’s population is starting to age, immigration will be vital to maintain the current workforce. Nevertheless, weighing up the cost of consequences like increased housing demand and thus prices, as well as other issues like congestion in cities, should too be considered when assessing the effects of migration on the UK.

Effects on wages from immigration

Migrant contribution to the exchequer

UCL study of immigrant contribution to the fiscal system