Satellites – From Globalisation to Beyond the Globe

Whilst on work experience Year 11 student Emily Bond from the Bishop Stortford College researched the future possibilities of Space technology. She has produced a timely article in light of recent news that the UK Space Agency is giving Highlands and Islands Enterprise £2.5m towards the development of the first UK spaceport to be hosted in Sutherland, Scotland. 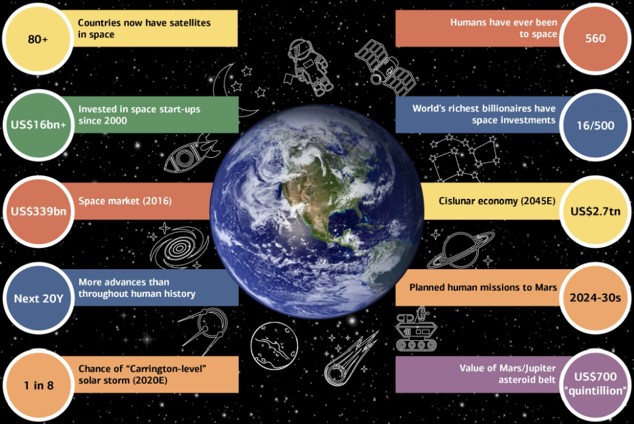 Since the beginning of this millennia, the space industry has more than tripled in value despite one of the biggest space organisations, NASA, having its budget cut almost every year since the end of the Cold War. One of the reasons the space sector has managed to not only survive but prosper through government budget cuts could lie in the increased number of private space companies such as Space X and SES. In 2018 anyone can use mobile data from an SES satellite across 99% of the globe including the oceans. The quality of these satellites is improving every year. Is this sudden growth due to rapid technological advancement or copious amounts of investment from today’s billionaires?

How has the space industry progressed in the past?

Whilst there had always been an inherent curiosity with the idea of humans visiting the moon, this thought was not actualised until the end of the space race in 1969 when Neil Armstrong took the first steps on the ground of our celestial neighbour. These steps took place a mere twelve years after the USSR launched Sputnik 1, the world’s first ever satellite. The reason such a sudden development in the space industry occurred back in the 1950’s and 1960’s can be attributed to two central reasons – the competition between the USA and USSR during the Cold War and the rapid technological advancements of the time. 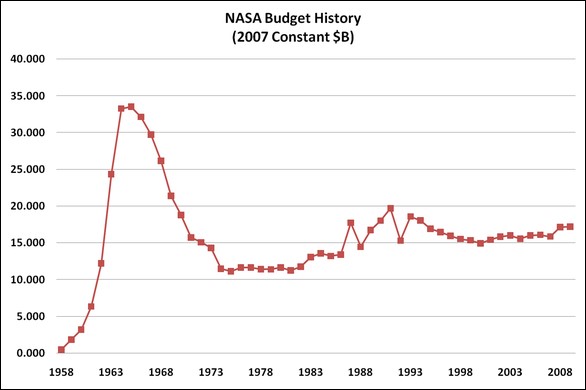 The space race was a matter of extreme national pride for both countries meaning that the budget for NASA was at its peak between 1950-60. This funding and desire to outperform led to one of the most rapid progressions in space technology of all time. At around the same time, other areas of technology were allowing the world to become more global with the increase in plane flight and the growing number of multinational corporations. This created the market for satellites on a wider scale in a way that would be useful to the average person. Satellites allowed TV to be shown worldwide, for more accurate and larger-scale maps to be created that have become an integral part of what is now modern-day life. So, technology was able to grow due to an increasing opportunity of its commercial application.

The technology was created to win a competition of sorts; however, it has many diverse uses, which most people rely on a daily basis. For the purposes of telecommunications, the satellite industry has continued to grow to the extent that someone could now watch the Olympics on a boat in the middle of the Pacific Ocean if he or she wished. Satellites have become a prerequisite for our way of life and therefore give a constant income to the space industry as they have a finite lifespan and require replacement. This has allowed the space industry to survive stringent cuts from government funding.

What are the key parts of the industry today?

In recent years the industry has not just survived but thrived. This is mainly due to increased funding in the space industry because of greater number of private companies joining the industry. 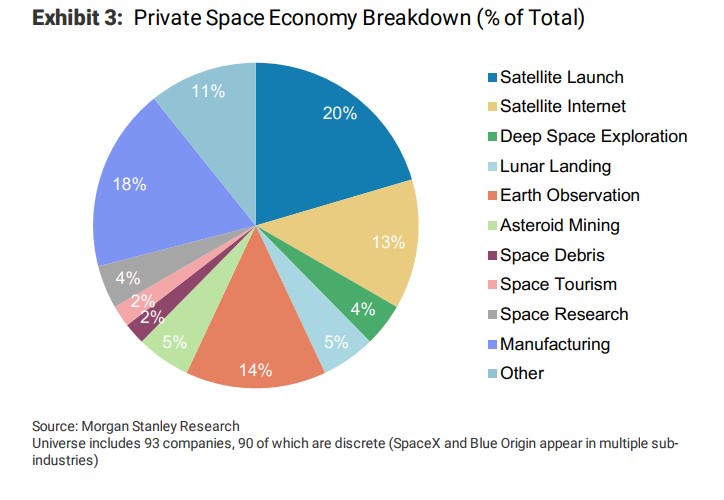 In 1960 most space endeavours were government run, by 1990 private satellite companies such as SES were beginning to catch up. The resurgence of the space industry didn’t truly come until the 2000’s with the founding of Space X and Bigelow Aerospace to name just two, both companies run by billionaires (the only people with enough money to invest in this high risk, high cost industry over the long period required to make advancements). It can take over a decade of substantial funding required to design and create the next level of space technology. Elon Musk spent over $100 million of his own money investing in Space X which has only just been able to create a reusable rocket. Therefore, private companies have been able to design and produce the cutting-edge technology that underfunded government programmes can no longer afford. Space X is now the frontrunner in launching satellites as they have produced rockets such as the Falcon 9, which are immensely cheap in comparison to government models. This has allowed satellites to be launched in increased frequency so that the entire world has access to coverage of a higher quality than before.

The future for space technology and space exploration

What comes next for the industry? Satellites have provided growth and reliable income for the space industry for decades but for the industry to continue, satellites will most likely have to start evolving in different directions as well. The same growth of the space industry as seen in recent years cannot be achieved by SES making sure the last 1% of the earth has satellite coverage, it is not a sustainable task to generate growth. There are already plans for alternative uses for satellites in the future, ones that would previously seem like science fiction.

Bigelow Aerospace has created inflatable satellites that could be inhabited by humans as they orbit the earth; smaller scale versions such as BEAM have already been connected to the international space station. Additionally, a satellite so big it could be used as an orbiting hotel or apartments has already been created on Earth. The limiting factor to the hotel becoming a reality in space is no longer satellite technology but the level of rocket technology and cost of space launches.

Space X is already addressing the cost issue by working to design better versions of Falcon 9, a reusable, cost-effective rocket. One reason Space X has been able to achieve what so many other space companies haven’t; is that Elon Musk has a bigger goal to facilitate life on other planets. Space X’s first mission to Mars is planned for 2024 but this mission will be a one-way trip. Reusable rockets that can go to Mars and return do not yet exist but in Space X’s attempts to achieve this goal they have created cutting edge rockets that are ground breaking nonetheless.

Unfortunately, at the moment not even Space X has designed rockets that could take the Hotel Satellite into space. But when this technology becomes possible the satellite is already built and so could be tested straight away. Furthermore, it is currently possible to own a cube satellite for your own recreational purposes, however, launching the satellite on a rocket headed to the space station could cost you between $3000-$8000 with a long waiting list. Therefore, owning your own satellite is still not an option for most people but could be in the future if rocket launches become cheaper.

For the space industry to maintain exponential growth the cost of rockets must decrease. If the cost of rockets does not decrease the sector would be unable to tap a multitude of opportunity that are on the horizon but are more price sensitive. So, satellites most likely will no longer be able to provide large growth to the industry on their own.

What I believe about the future of space technology

Past investment in satellites has fuelled enormous space industry growth in recent years but I believe future investments need to be in rockets for this growth to be sustained. Presently, rockets are too small and far too expensive for the commercialisation of satellites, for personal use or as holiday destinations. Manned missions to Mars may not be of paramount importance to most people, but the idea has sparked an interest in space for many people. Elon Musk’s determination to get to Mars is allowing space technology to advance more rapidly as the same technology created could be used for more everyday purposes back on earth. Making space accessible to the average person could be a future reality as Space X strives to make the cost of human spaceflight ten times cheaper than it is now. Satellites helped achieve globalisation but if we wish to go further than the globe, companies like Space X investing in larger re-usable rockets is paramount to future space industry growth.