Where are the women in STEM professions?

Microsoft research has highlighted that there is just a 5 year window to ignite STEM passion in UK schoolgirls before interest markedly drops off (between the ages of 16-17). Charlotte Brown from the Bishops Stortford High School is a keen Yr12 Maths student; she has recognised in her studies that girls are significantly underrepresented in STEM, therefore wanted to research why and what is being done to help rectify the situation. 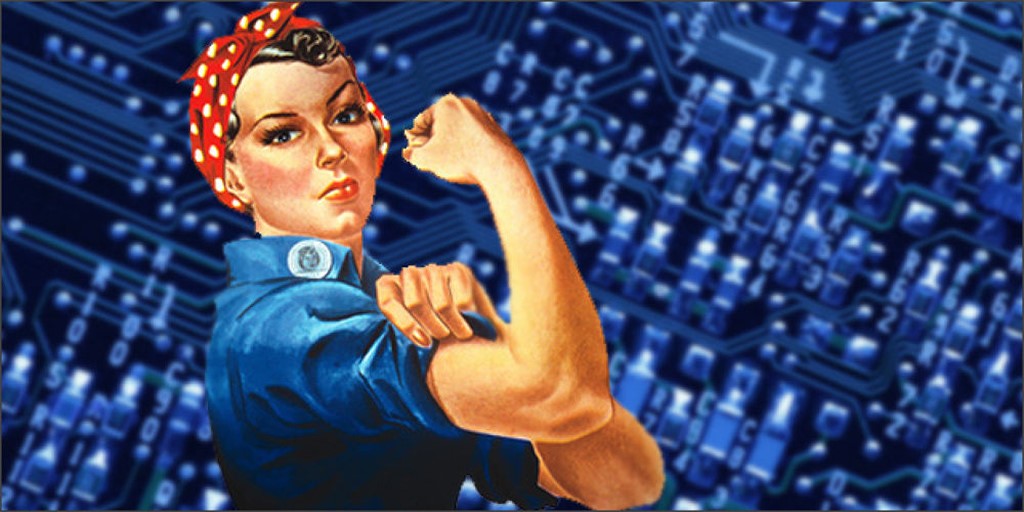 Approximately 17% of STEM professionals are women, despite making up 46% of the UK’s workforce. It is apparent that there is a lack of female presence in professions involving Science, Technology, Engineering and Mathematics.

This travestying situation has derived from a number of factors; the evoking one being education. Girls are simply failing to engage in science-based subjects at school, instead taking the more creative route in subjects such as English or Art. Why is this, and how do we solve the problem?

To shed a personal insight onto the topic of education, as a student myself, I have discussed with peers and have come to a collective conclusion, that teachers of stem-related subjects are not deemed to be as enthusiastic as other subject teachers; they are not ‘pushing’ females to continue studying sciences, mathematics or technology at a higher level.

An underlying factor for the lack of females in STEM professions would be the concept of femininity. With an implanted idea that females and science are incompatible, a fallacy has been formed that STEM careers do not conform to the social construct of typical feminine attributes. In tech, with more females leaving the industry, it has become a heavily male-dominated area. A report from the Centre for Talent Innovation, for those that have careers in science, engineering or technology, exclaims; women are 45% more likely to leave within the year, than men. This subsequently makes having role models at the top more and more difficult, adding to the cycle of female despondency.

Inspiration is a part of the problem. More female teachers need to encourage interest among girls by ‘pushing’ them to take risks, go against stereotypes and raise confidence in their abilities. Studies by the University of North Carolina found there is a “positive and significant” association between the proportion of female maths and science teachers in a secondary school and the likelihood that a female student will choose a STEM-related course.

Nurture, the way children have been brought up, can also play a key role as one of the factors as to why STEM professions haven’t been the main ‘go-to’ career. The debate that coding should be taught from an early age, such as languages are, involves many interesting opinions, but primarily can be a key role in increasing women’s involvement in STEM related careers. Being taught code, can eliminate ingrained beliefs of women not being compatible with the STEM topics, but can also build the confidence from an early age, not making it a ‘taboo’ when one starts studying mathematics or science at secondary school. This will benefit all students, male and female.

Studies show 94% of boys take STEM-related A-levels, compared to the girls, where only 34% take these subjects; this then decreases to 9% of girls carrying on their STEM-related studies in further education, i.e. at degree level. This shows a 59% difference in A-level subject studies. These figures contribute towards the statistic that women only make up of 14.4% of UK STEM workforces. Moreover, less than 7% of tech positions in Europe are filled by women. These numbers underline how drastic the problem is and highlights why it needs to be solved.

So how do we tackle this problem? How do we encourage more young women to stay involved within STEM?

We must remember the importance of focusing on students’ high school years to help boost the number of women entering STEM-related fields, either by changing teaching methods, offering incentives, or even educating women on what STEM professions can entail. However, there are always more ways to push for success, by targeting and capturing the developing minds of younger students, such as introducing code at an early age, allowing them to access a fine set of skills that can benefit future career choices. Along the way, also encouraging boys, as well as girls, to pursue whatever they are naturally intrigued by.

STEM to STEAM. As statistics show, more girls further their education in Art, rather than Mathematics or Science. 35% of girls said they are more interested in Art and only 7% are more interested in technology at school. Therefore, Two Bit Circus have been arguing for some time that the push for STEM in education is missing something. Researchers say that to really draw talented young people into science and engineering careers, STEM needs an “A” for “Art,” turning it into STEAM. Perhaps Art and Design could be an important angle in attracting more women into the field.

Studies show boys performed better in two thirds of 70 countries measuring applied learning in maths at age 15. Shortage of women in STEM spans globally, however Vietnam have taken approaches over the years to increase population in STEM. In 2015, the Ministry of Science and Technology and Lien minh STEM organized the first National STEM day, followed by many similar events across the country. This helps to raise awareness to students, women and men to what careers and opportunities are out there for them. Also, in 2015, the Ministry of Education and Training included STEM as an area needed to be encouraged in national school year program, this is tackling, what I believe to be, the route of the problem of the shortage of women in STEM. By enforcing a stem programme, will allow students to be educated regardless, which can hopefully inspire young minds, making them want to pursue a further career. Programmes such as these, can only help to shape and build the minds of women, to encourage them to become more involved, which is the first step to solving this issue.

Role models also play a key role along the journey to finding the solution to encourage young girls to be involved within STEM. Microsoft has revealed that the number of girls interested in STEM across Europe, on average, almost doubles when they have a role model to inspire them. Role models such as Martha Lane Fox, are important as they demonstrate leadership and confidence; an attribute most girls lack when coming to academic studies.

It is such an exciting time to be fulfilling a career in STEM as an ambitious young female. There is an extreme variety of paths that can lead you to success filled places, from hospitality to healthcare, from finance to construction. It’s time we take charge and focus on the next generation.

This is an arduous battle, but one that the world needs.