How will autonomous vehicles affect us?

Whilst on work experience Alex Ainsworth (Yr11 student) from The Bishop's Stortford College explored the growing phenomenon of autonomous vehicles. 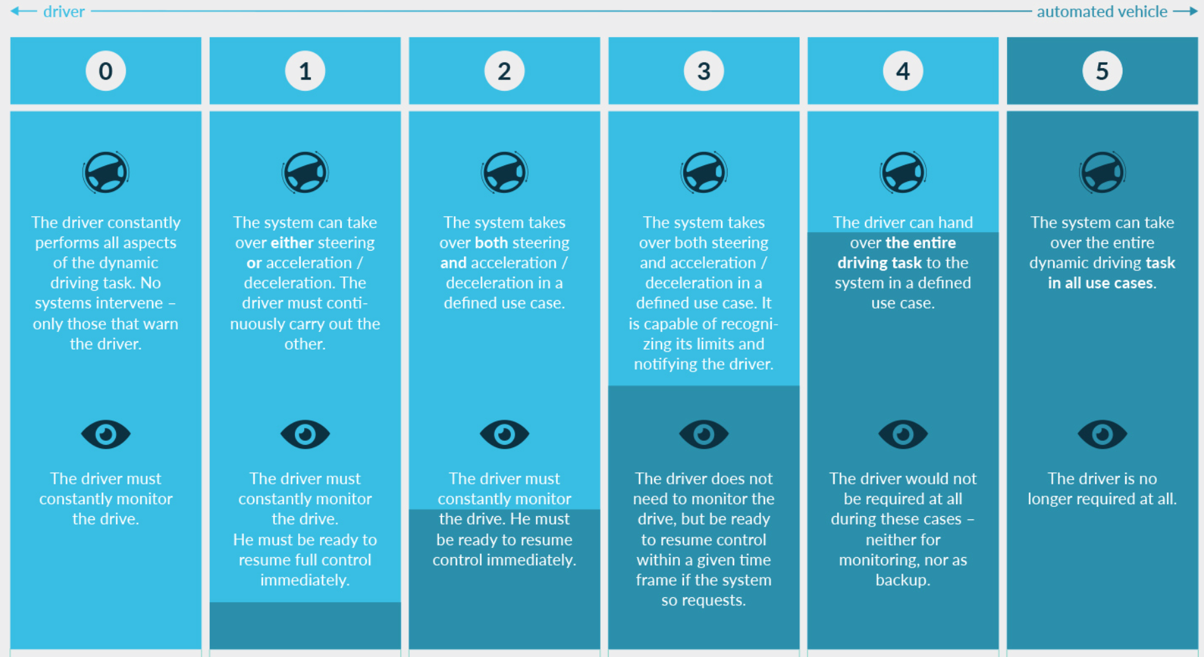 In 1908, the Ford Motor Company created the world’s first mass produced automobile, the model T. In 2016 Ford announced its plan to have fully autonomous vehicles in operation by 2021.  As such, with the demise of driving seemingly on the horizon, this raises many questions

What are autonomous vehicles?

“Vehicle” – a mobile machine that can carry people or goods.

By definition, an autonomous vehicle (AV) is any self-governing, mobile machine that can carry people or goods.  The Society of Automotive Engineers created a scale of automation ranging from ‘level 0’, no automation, to ‘level 5’, full automation, which shows how cars should evolve into AVs (opening image). Currently, many modern production cars have the capability to be level 2 AVs with features such as lane assist, dynamic cruise control and automatic parking, becoming more common. 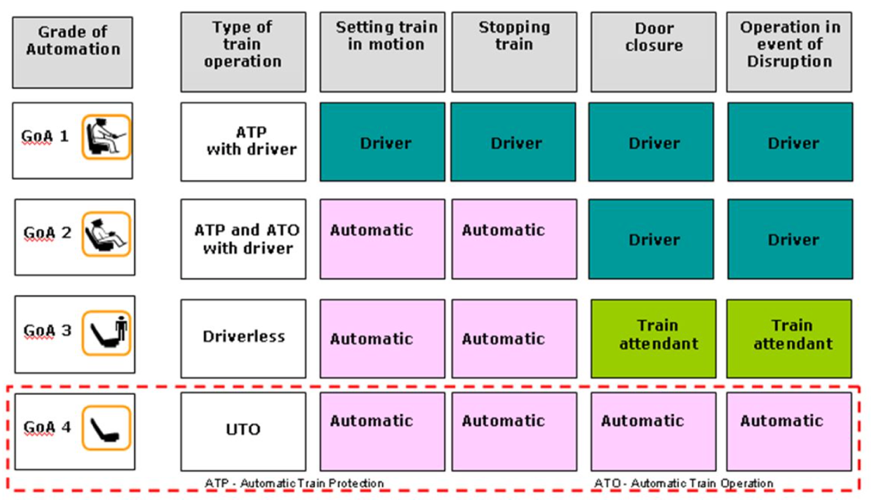 There is a widespread belief that the term ‘autonomous vehicle’ only applies to driverless cars, trucks, and other road vehicles. Whilst autonomous cars seem to be the area for most current development, AVs have been part of human life, in a variety of forms, for over a century as the first autopilot was developed in 1912 by the Sperry Corporation. One major benefit of autopilot is that it keeps everything constant which significantly increases fuel efficiency.  Many train systems have now become at least partially autonomous, these are classified by the Grade of Automation (GoA), including the DLR, which has been a driverless line since it opened in 1987, as well as the Central, Northern, Jubilee and Victoria lines which are now GoA 2 lines. Another group of AVs are Unmanned Aerial Vehicles (UAVs). Although ‘unmanned’ and ‘autonomous’ aren’t synonymous, most UAVs have autonomous capabilities and don’t require constant human control. The term UAV covers many different types of vehicle ranging from fixed wing to helicopter-like vehicles as well as the now common quadcopters. UAVs were largely developed for military reconaissence and combat. However, the creation of quadcopters led to the number of civillian UAVs surpassing military UAVs, with an estimated 400,000 UAVs being bought for Christmas 2015 in the US alone.

What impact will autonomous vehicles have on our lives and our world?

There are several arguments both for and against AVs for a variety of reaons. One positive element of autonomous cars is that when full autonomy is achieved, they will be incredibly safe as they will be able to sense and avoid potentially harmful obstacles faster than humans can. Similarly, all AVs would be capable of sharing data, such as planned routes, with each other, via the ‘Internet of Things’, which would enable them to safely negotiate junctions in a highly efficient manner. This is incredibly important as in 2015 road injuries caused around 1.3 million deaths globally, with an estimated 94% of all car crashes being due to human error; AVs should drastically reduce these figures.

A further benefit of AVs would be their impact on our environment. Given the recent rise of hybrid and electric cars, in conjunction with advancements in renewable electricity production and storage, it is safe to say that autonomous cars will abandon the internal combustion engine in favour of the more efficient, and environmentally friendly, battery power. The US Energy Information Administraton estimate that in the US, petrol and diesel vehicles produced over 1,540 million tons of CO2 in 2016. To resolve this, AVs could be fitted with photovoltaic film skins, allowing them to generate electricity whilst in the sun. However this isn’t a reliable source of power so it is likely that wireless charging bays will enable them to re-charge overnight. Using renewables as the powersource for AVs would significantly reduce our carbon footprint as transportation makes up an estimated 14% of global greenhouse emissions according to the Environmental Protection Agency. Also, electric vehicles are around 60% efficient compared to the 20% efficiency of petrol engines.

AVs will also have a massive impact on the logistics industry. Services like Amazon Prime Air are working on packages being delivered to your door by UAVs within several hours of ordering. This means there will not be lengthy waiting periods for deliveries and people will be able to make-last minuite orders without fear of it not being delivered in time. Similarly, Starship Technologies (launched in 2014) have released a delivery bot that can securely deliver items to your home at a preset time, removing the need for you to wait at home thus freeing up time for you to use productively. Conversely, introducing AVs into the logistics industry will have an undesirable social impact as low demand will cause many delivery drivers to lose their jobs (there are approximately 3.5 million truck drivers in the US alone). This problem would also be seen in the transportation industry as taxi, bus and train drivers would all become obsolete. This would initially have a negative impact on the global economy which would hopefully be partially offset by retraining programs and an increase in supervisory roles.

One major risk of AVs is their potential vulnerability to hacking. With cyber-attacks becoming increasingly frequent and the cost of cyber crime predicted to reach $6 trillion by 2021, it is hard to imagine a future where infrastructure and services centred around computers are not targets for cybercrime. This threat is particularly worrying due to the complexity of programming needed for AVs to function properly, which lends itself to vulnerabilities, and the fact that AVs will need to be connected to the outside world to operate. These provide hackers with the opportunity to remotely access software and possibly take control of vital systems such as the steering or the brakes, if not the whole vehicle.

Cyber-attacks are a clear and present danger to modern society, which is evident as the UK government is investing £1.9bn in cybersecurity. As such, one would expect that anyone involved with AVs would have to either invest large sums of money in developing their own cybersecurity systems or pay companies like Argus Cyber Security to protect their vehicles. This is just one aspect of a larger issue with AVs; the setup cost. When CEO Mark Fields announced Ford’s AV program, it was said to cost around $4.5bn over 5 years; a relatively small figure compared to tech giant Intel acquiring AV tech firm Mobileye in March 2017 for $15.3bn. These astronomical setup costs are incredibly worrying as most large automotive companies have invested significant amounts of money in AV development. Therefore, if they are to make even a small profit these costs will have to be passed on to the consumers.  This could be in the form of expensive vehicles, or something like a taxi service that spreads the cost out over a long time and many journeys.

Another concern over AVs is how they would deal with their ‘Kobayashi Maru’; a lose-lose situation where no matter what the vehicle did, the outcome would be deemed a failure. The most likely example of this would be if a crash were inevitable and the vehicle had to decide between saving the lives of its occupants thus resulting in the deaths of others, or sacrificing the occupants to save the others.  This kind of ethical dilemma raises questions about how ‘moral’ a computer can be. Can factors like age or number of people be used as quantifiable factors to make a judgement about who lives and dies? Who is responsible for AVs functioning? How can AVs be held accountable? Can ‘morality’ be coded? Can people trust something that could be designed to kill them or should the vehicle have a directive to save the passenger above all else? At present, many people are unconvinced of AVs’ benefits and carry a strong stigma about their safety. Until this changes, it is unlikely that AVs will gain traction and reach their potential. 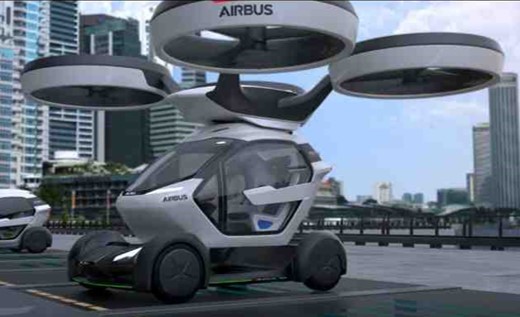 Clearly, no one can say with complete certainty how the future of AVs will turn out. However, with the quantity of money that has been injected into AVs, and successful testing of autonomous cars and delivery systems, it’s reasonable to assume that these are emerging technologies, and AVs in general, will continue to grow and soon become widespread. With several large brands, such as Ford and BMW, predicted to come to market by 2021, AVs are set to become commonplace items within a decade.  As such the real question is what comes next? As time goes on, research into energy production and storage, as well as more efficient motors, will lead to AVs having larger ranges and becoming even more versatile. Perhaps we will reach the point where individuals have their own autonomous pod that can work as a road vehicle as well as attach to larger structures, such as modified planes or boats, that could cover vast distances allowing people to cross continents and oceans effortlessly. Whilst the prospect of AVs taking us wherever we want greatly excites me, I’m slightly saddened by the fact that the rise of AVs means the demise of some incredibly beautiful machines and it is unlikely the next generation will ever have the pleasure of driving for themselves.