Amazon Prime Air - Will it take off?

The drone industry is the latest technology to disrupt the retail and delivery ecosystems. Whilst on work experience Lottie Wilkinson (Yr10 student) from The Herts and Essex High School investigated how Amazon is incorporating drone technology in its business.

The delivery industry is where companies provide delivery and pickup of parcels. Some major delivery companies include Amazon, FedEx and DHL. At the moment parcels are delivered by van or lorry. By introducing the Prime Air service, Amazon has completely changed the delivery ecosystem. This is because they have come up with such a new idea that is considerably faster than other delivery services. Also, they are replacing some human jobs with a drone, which after all, is just a piece of technology.

Using drones presents a big cost reduction opportunity for Amazon, with estimated 80% cost savings coming to last-mile shipping, or the shipment between the final storage hub and the customer's home.

Amazon has put in a patent for beehive-like depots, which in the future they plan to build in every city to use for dispatching drone deliveries, which will be part of their Prime Air service. This is delivering small parcels by drone in just under 30 minutes, meaning customers will have a very speedy service. The service runs 7 days a week meaning customers can get their parcel whenever they want. The beehive will have 9 stories and is designed to use up less space in towns and cities and cut down congestion, as there will be fewer lorries and vans on the road.  Amazon are the first company to have used drone delivery, therefore they will be recognised as a innovator in the industry. 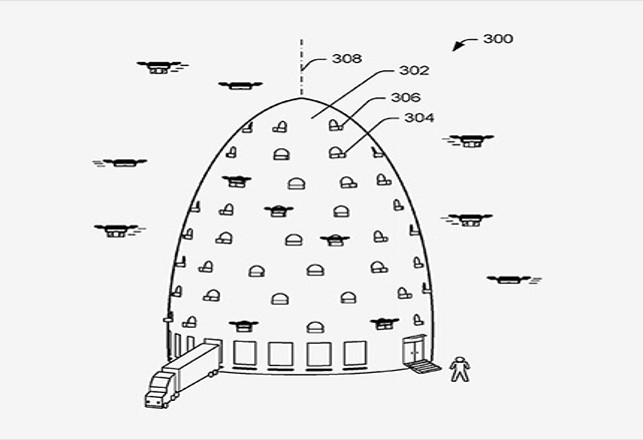 However, the Prime Air service does bring some disadvantages. Firstly, customers need to have a helipad in their garden for the drone to land, meaning exra costs for them. It also means that for anyone living in a flat or somewhere without a garden, delivery will be very tricky.The helipad also brings the problem of security. If you are not there to collect your parcel it will be out there for anyone to take. A possible solution to this is a box with a helipad on top that could open to allow the parcel in and then lock again. Or if you are living in a flat there could a communal safe area. There is also a problem of security as there is a possibility the drone could land in the wrong place and someone else could claim the parcel. A solution to this is having something on the drone to confirm it is your parcel, for example a key pad and code.

Secondly, you have to live relatively close to the beehive, as the drones may run out of battery. The bigger the drone, the bigger the battery it requires. Under normal usage (meaning not a lot of wind or cold weather), a drone should be able to fly at least 15 minutes. More than that is a big win. The only real solution to this is Amazon need to get the biggest drones possible, or consider building more beehives to accommodate people who live nearer the outskirts of a city.

There is also the issue of safety while the drone is flying. Many Amazon customers have raised their concerns of a number of issues that could happen while the drone is flying. Most importantly, the drone could suddenly fail in the air causing it to fall from the sky, if anyone was underneath it they could be seriously injured. To reduce this danger a number of rules have been introduced. Firstly, the drone must be within line sight of the pilot in command. Also, pilots must only operate one drone at a time unless they have received proper training and have a license to prove that. These pilots could be situated in the beehives.

Also, there is a privacy issue. The FAA’s (Federal Aviation Administration) states that drones will not be able to fly over houses, there must be a monitor/pilot on the ground/in the beehive at all times watching what the drones are doing. The solution to the problem of privacy is the drones have a designated route that avoids people’s gardens and doesn’t go over any other private places. Obviously, the customer will have to give permission to say the drone can go in their property to deliver the parcel.

Finally, there is a 2.3kg weight limit meaning some customers might not be able to benefit from this service. There is not really anything Amazon can do about this as drones are a limited size and therefore can only carry  limited weight.

On the 7th December 2016 Amazon tested the Prime Air. The trial was for a customer in Cambridge who had a large garden and lived near the depot. They delivered a bag of popcorn and a TV streaming stick. It took just 13 minutes from the order being received to the drone landing with the package.

In conclusion, Amazon Prime Air will be a major advancement to the delivery sector. It will means jobs are lost in depots but jobs will also be made in the new Beehives, using more advanced skills (such as being a drone Pilot). It means that customers will be able to get their parcels much quicker and the day they want them. But, this does bring concerns that as a nation we are getting so impatient that we can no longer wait for a parcel that used to take anything up to a week to get to us. Finally, it will also create a good image for Amazon as they have made such a big step to provide the fastest service and are continuing to innovate in their industry. 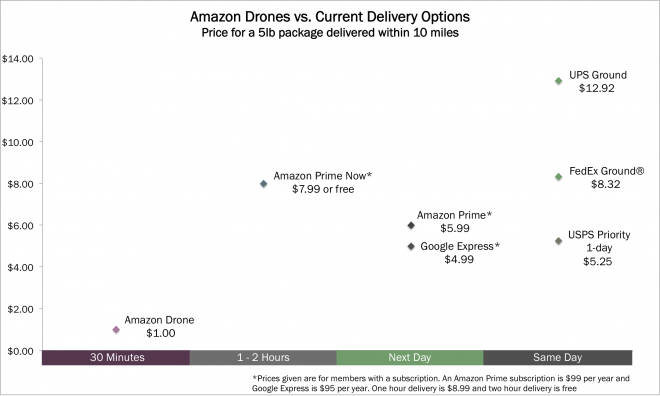 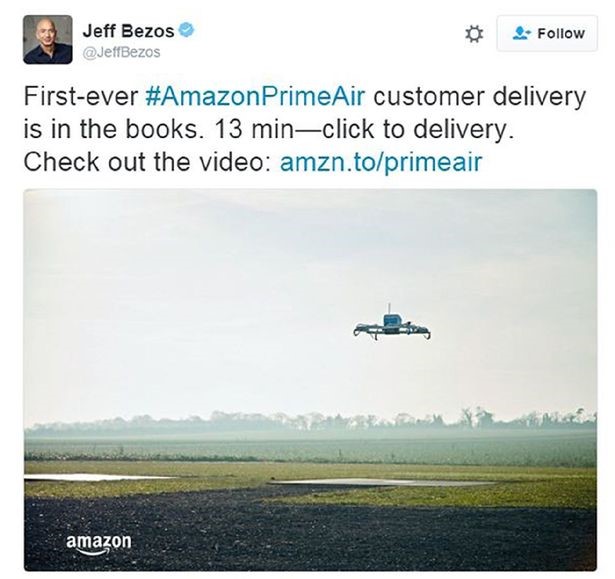 This was the tweet from Jeff Bezos, the founder of Amazon, after the first drone delivery. Click on the image to watch the video.