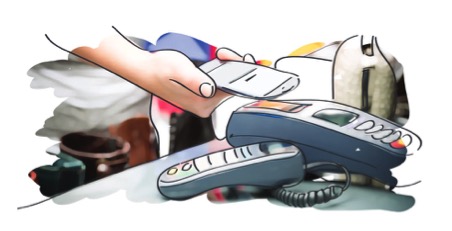 There were 1 billion UK contactless purchases made on credit and debit cards worth £7.75bn in 2015 which was more than double the previous seven years combined.

Contactless cards were first introduced in the UK in 2007 with a limit of just £10 for low-value transactions, the pay threshold has since increased to £15 in 2010, to £20 in 2012 and £30 in September 2015. Contactless payments require no PIN or signature to authorise payment but instead uses Radio-frequency identification (RFID) or near field communication (NFC) from embedded chips offering a fast, easy and secure way to pay on a range of devices which include:

Poland, Spain and the UK currently lead the way in the ‘wave and pay’ technology. British contactless use has grown by 300% from 51 million transactions in April 2015 to 153 million in April 2016. The UK has a well-developed card acceptance network, sound regulation and proven consumer willingness.

Central London had the highest adoption of contactless payments with TfL being a key innovator accounting for 11% of all contactless transactions in December 2014. The increase in transaction volume led the UK card payments industry to raise the £20 limit to £30 on 1st September 2015. This has facilitated significant growth in higher value contactless payments. They are the norm in the UK and Sweden, with contactless being used 20% of the time for every face to face UK card transaction under £30 compared with only 4% the previous year.

However, NFC payments have not taken off in Germany where they have deeply ingrained social habits and attitudes regarding cash. These transactions represent anonymity and is highly valued as part of their democratic freedom.  A recent Bundesbank study showed that 79% of German payments were made in cash (compared with on 48% in Britain). Furthermore, 72% considered cash to be safer from a YouGov survey.

How secure are your payments?

Contactless technology has the same level of security as chip and PIN but offers a quicker and easier means of payment. Its platforms are based on secure EMV chip technology that provides both data protection and transaction security via the use of keys and the latest encryption technology. Each transaction generates a unique and encrypted security code, which changes every time the card is used. Minimal information is transmitted when a transaction takes place, with your name, card account number and security code not being used. There is no daily limit on how many contactless payments can be made, but if several are made in a row, then the user is prompted to enter the card’s PIN for security validation purposes.

Figures produced by the UK Cards Association show that fraud on contactless cards is low with £516,500 fraudulent transactions in the first half of 2015, equating to just 2p for every £100 spent using the technology.

However, many transactions are made ‘offline’ to improve the ease and speed, with the transaction being processed with the bank at a later stage. Hence, if a card is reported lost or stolen any payments made offline on the day of cancellation could still be applied to accounts, therefore making it the customer’s responsibility to identify them in order for the Banks to issue a refund.

What are Mobile Payments and do they offer more?

‘Mobile payments’ are also known as mobile money, mobile money transfer and mobile wallets. These payments are operated under financial regulation on mobile devices such smartphones or wearables and enable the consumer and retailer to exchange cashless payments securely.

Apple Pay, Android Pay, Samsung Pay and Barclays Pay have all been designed to integrate with the platforms of their respective companies to support the vision and continued growth of the payment space.

The rapid growth of the mobile NFC payment market has given the opportunity for small business owners to maximise sales with the ability to accept mobile payments as well as cash. The mobile payment technology is straightforward, secure, requires minimal infrastructure, has relatively low costs and is trouble free.

The increased popularity of mobile payments is due to the many benefits they offer such as speed, convenience and security. No credit card details are stored but a device-specific token is used in the ‘secure element’ chip on smartphones or wearables. Biometric technology is also used with Apple Pay’s two-factor authentication (your phone and your fingerprint) and offers added security protection.

Consumer adoption has noticeably grown with the increased spending limit to £30, being most popular in bars, clubs, restaurants and transport. In January 2016 TfL recorded 3.2m journeys using ‘mobile devices’ in the 6 months since Apple Pay launched. Additionally, more retailers are developing apps that use prepaid commerce in conjunction with digital offers and loyalty schemes. Such as Greggs which launched its ‘Greggs Rewards’ app developed using the Eagle Eye digital transaction network. It enables customers to top up their accounts with any amount from £5-£50 using a debit/credit card allowing them to receive rewards and pay swiftly for their purchases in-store with their smartphone. This digital solution offers a quick and seamless shopping experience for the customer and allows Greggs to be more engaged to better understand each customer’s individual shopping behaviour.

The future is mobile

Cash is still currently favoured by many, however it is predicted that ten years from now the infrastructure will be in place so every payment can be made via cards stored on your smartphone. Gartner has said that the global market for mobile payments will be worth $720 billion in transactions by 2017, up from about $235 billion in 2014.

W5, part of Charlotte’s Group restaurant business is entirely cashless with only cards and Apple Pay accepted. This enables the business to reduce its insurance costs and maximise daily administration efficiency.

More evidence points to mobile, as the payment ecosystem is likely to expand with built-in loyalty reward programs offering extra benefits to incentivise and entice customers. Increased awareness will continue to rise with more retail marketing however, mobile payments still require a substantial behavioural change. Concerns over battery life, will diminish when it’s more widely known that payments can still be made from the residual power in the NFC chip if a smartphone’s battery charge has run out.

The retail infrastructure is essential to the success of mobile payments. However, a growing number of retailers are starting to support ‘higher value’ payments that exceed the £30 contactless limit if the cardholder uses additional verification methods such as touch id or tokens.

Convenience, speed and loyalty incentives will play an important role in adoption but security will be the key issue that will determine a consumer’s preference. The increased variety of mobile payment services available on iOS and Android devices and the implementation of biometric technology will inevitably entice the security-conscious.

Major banks, investors and governments are also keen to explore the potential of blockchain-as a-service to the UK public sector, with its decentralised irreversible ledger that has vast security benefits and the potential to reduce the high levels of fraud in the world’s economy.

As these technologies continue to progress it will become more convenient and secure to reach for your smartphone that contains all your cards in digital form than the plastic in your wallet.