3D printing also known as additive manufacturing, turns digital 3D models into solid objects by building them up in layers. Whilst on work experience Christopher Wilkin (Yr11 student) from The Bishop's Stortford College explored the growing developments of this technology.

One of this decade’s most technologically advanced developments in the modelling industry was the development of the 3D printer. When given the correct instructions, it can recreate what was just a virtual object, designed with mouse and keyboard on a computer, into a real object that you can touch and hold. Previously, prototypes for complex designs were created through long, laborious processes, often done completely by hand due to the unique nature of the designs. Now, with the aid of 3D printers, the same models can be sculpted in front of your very eyes in just a few hours.

Despite how fast 3D printers can create models when compared to the traditional ‘by-hand’ methods, there is a constant demand for them to be even faster. But this is limited by one main factor: the presence of oxygen. In order to see why this is, we first have to understand how it is the current 3D printers actually work.

There are two main types of 3D printing, though there are many other ways to print besides these. The most common method used in cheaper printers is called Fused Deposition Modelling (FDM), invented by a man called Scott Crump.

In all 3D printing, there is one critical process that is present in all the different types of printing. In order for the printer to know where to place material, the 3D computerised object is sliced into hundreds of horizontal layers. Then each layer, from the bottom up, is printed in turn, building up layer upon layer of the chosen material until it appears 3D.

FDM is a very simplistic way of 3D printing. The machine prints using a coil of material, often coloured plastic or a metal based compound. Inside the printer nozzle, a heating element brings the material to just above its melting point, so the plastic leaves the nozzle as a liquid. Normally, Polystyrene is used, as it is a relatively cheap thermoplastic, melting at 100°C, however, other alternatives are available, such as ABS or acrylic. As the nozzle is able to move anywhere around the 2D build platform (controlled by a computer-numerical-control system), the printer accurately draws the outline of the layer on the print-bed and fills it in. As the consecutive layers build up, they form a solid version of the computer model. If part of the model is unsupported, some printers will use a second, water-soluble polymer to support that section of the model. When it is finished, the support structure can be removed by soaking in water, leaving only the desired parts behind.

This is a slightly less used type of 3D printing, but is able to produce much larger scale objects. It also relates to one of the recent developments in 3D printing. 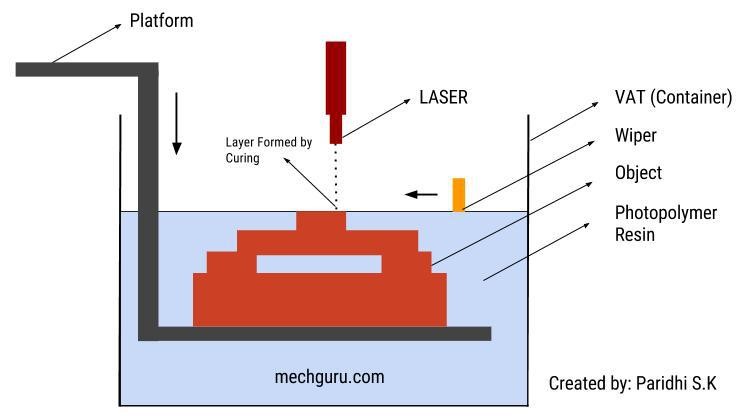 As with FDM, the computer software first slices and orientates the computer model into layers. As suggested in the title, there is a large vat of liquid polymer. The build platform sits just under the surface of the polymer, and as successive layers are built, the platform moves deeper into the vat to allow more layers to be built on top. The polymer has special properties that allow it to set into a solid when UV light is shined on it. This process is called photopolymerisation. A narrow UV laser, again controlled by a CNC system, draws the outline of the layer onto the vat of polymer. This causes parts of the polymer to set where the laser was on-top of the build platform in the shape of the model. The layer sits on the build platform, and as the laser goes around again drawing the next layer, the object is built up. Unfortunately, the photopolymerisation effect is prevented by the presence of oxygen, so this process only works when there is no oxygen present.

However, for each of these problems, there is now a solution.

The biggest advancement in 3D printing not only speeds up the building process by almost 10 times, but also gets rid of the oxygen problem. It’s called the M1, it’s made by a company called Carbon, and it uses a brand new technology called CLIP.

CLIP stands for Continuous Liquid Interface Production, and this is what makes the process so much faster. The M1 uses a similar process to Vat Photopolymerisation, except the build platform rises out of the polymer with the plastic stuck to it, rather than descending into the liquid as in the previous method. Another difference is that, rather than setting the polymer using a UV laser, the M1 uses an ultra-high quality UV projector that shines an image of the object’s layer onto the underside of the build platform. Special lenses custom made for the printer ensure that the image is of equal intensity at all locations on the build platform so that the polymer sets at a consistent rate. 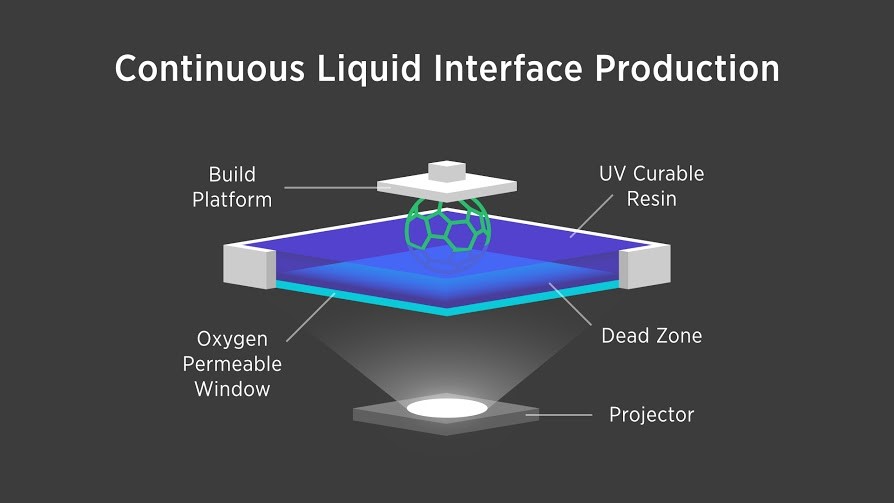 The continuous aspect relates to the fact that, when using CLIP technology, layers are not built on-top of each other as separate entities, but instead, the image provided by the projector seamlessly transfers from one layer to the next at a set speed without stopping. This, combined with the slow ascension of the aluminium build platform, cause the setting polymer to be built as one large structure, rather than as a mass of individual layers.

In Vat Photopolymerisation oxygen is viewed almost as an enemy. Joseph DeSimone, the co-founder of the company Carbon, instead wanted to use it in their favour. The M1 printer uses advanced computer software and engineering in order to accurately apply oxygen through the gas-permeable base of the polymer container. This effectively increases the resolution of the product produced. By applying oxygen in all the locations that you do not want to set, even the smallest degree of image or focusing inaccuracies from the projector have their setting effect on the polymer countered by the oxygen, resulting in a product with perfectly smooth edges and clean faces comparable to machined products.

One benefit of this is the reproducibility of the products made by the printer. Previous printers always had a slight margin of error due to the layers being individually printed and stacked. This also resulted in slightly rough faces and edges on the surface of the object, as each layer had slightly rounded edges (something more noticeable in FDM printing than in Vat Photopolymerisation printing). The CLIP technique builds the whole object in one, continuous motion, making the finished product much cleaner on the outside. Furthermore, it allows for much more predictable mechanical properties. As the products produced by the M1 are completely solid, they behave in a more typical way, with equal strengths in all directions. Conversely, previous 3D models have been weak horizontally due to the weak bonds between the different layers of the model.

Finally, another added benefit of the M1’s technology is that the range of resins used to print from comes in a far greater range than has been seen in any other type of 3D printer. The range of resins available include polymers that become elastic and rubbery a few hours after setting, resins that produce metallic finishes, as well as resins that produce a clear product with a glass like look.

Carbon say that the M1 will be used by car manufacturers like Ford to create low demand replacement parts that are not economically viable to keep in stock. For example, if one car owner needs a new door handle for a 2003 model, and another needs a new wing mirror for a 2005 model, the company no longer has to stock all the parts for these cars just in-case they are needed. Instead, they can 3D print them in the garage and have them fitted the same day. The high quality finish produced by the M1 creates a huge change in the uses of 3D printing; it is no longer just a prototyping method, but will soon be a standard manufacturing process. However, the M1 is not cheap, and while its technology is revolutionary for our time, it will be a long time before it becomes a commonly used product.

3D printers have developed a huge amount over a very short period of time, moving from simple FDM printers, to PJP to CLIP printers. In just 30 years, we have developed the technology from an experiment in Charles Hull’s shed to a globally acknowledged method of modelling and manufacturing. The future of 3D printing could be really exciting, especially with the emergence of 4D printing, where the 3D object can change its shape in water. Hopefully these new innovative technologies will become more widespread across the market and as the prices drop they will become increasingly accessible to everyday people.