Coronavirus: Is now the time for the robot uprising?

Whilst robotic use cases have been prevalent in many industries including the military, manufacturing, agriculture and healthcare for quite some time, Sophie O'Flaherty Yr11 student from The Herts and Essex High School was curious to see what a positive and integral role they have played during the Covid-19 pandemic. 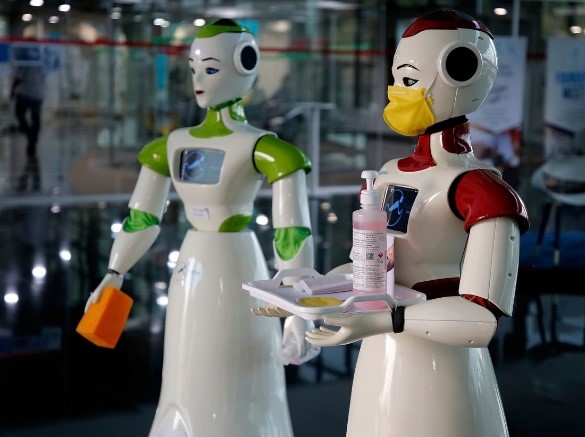 Humans are imaginative and for thousands of years have dreamt of new and exciting ways that future generations may lead their lives, and, for over a century, robots have been a big part of that vision. There are in fact more than 2.6 million robots at work in the world today most of which are used for industrial applications, such as electronics manufacture, drug production, welding and much more.

We're increasingly encountering robots in our everyday lives, with robots as well as examples of Artificial Intelligence (AI) being found almost everywhere; robots such as 'Roombas' that clean your home as well as the 'virtual assistant' (your Smartphone) that you’re probably carrying around in your pocket right now!

As you’ll read below, the Covid-19 crisis has shown us the extent to which robots can be utilised. So, while we may not be living on the moon in 2020 our robots can already do some pretty amazing things!

There are even robots in the world that have become celebrities, such as Hanson Robotics’ Sophia, a humanoid robot with AI which allows it to hold natural conversations - Sophia has even been given Saudi Arabian citizenship. There are also lots of small robots with basic AI, like the Anki Vector toy, a small robot that looks like a forklift and can perform the same duties as a virtual home assistant like Alexa or Siri, such as setting up timers, give weather updates and can even take pictures. But recently robots have been used in projects that could potentially be lifesaving. 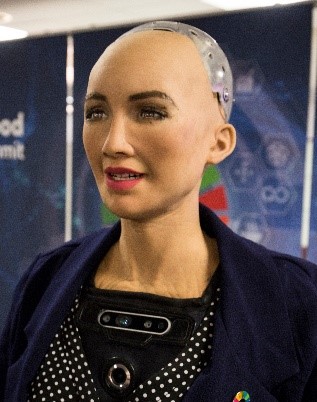 Whilst in lock-down more robots have been set up and sent out to help people all over the world, an example of this is at the University of Liverpool. While human scientists could not work in the labs together, a robot “co-worker” could remain at the facility, continuing to conduct thousands of tests a day even faster than the human scientists could. More robots like this could help speed up the development of a vaccine for Covid-19 amongst many other things, especially with the advancements made to their AI allowing them to make decisions for themselves based on previous test results.

Robots aren’t just pulling their weight in the lab either, there have been some robots like Boston Dynamics Spot Bot that have been sent out on patrol to help enforce social distancing. The Spot Bot robot which had originally been developed to navigate tricky terrain to help in rescue tasks after natural disasters, has been repurposed in parks around Singapore. The robot dog walks around the parks, reminding people (which it can recognise with it’s sensors) to “please keep their distance from one another” and to “not spend too long outside” with pre-recorded messages that it can play. The Spot Bot also helps record the number of people out in parks to be able to provide some Covid-19 tracking data.

There have also been many other examples, such as food delivery bots in Milton Keynes: fleets of six-wheeled delivery bots which can pick up food parcels from the shops and take them directly to the most vulnerable society members without forcing them to leave the house for the essentials. Mobile disinfection robots in Chinese hospitals which are using UV lights to deep clean hospitals, so that medical staff are less at risk. Even NewMe bots which are mobile video units, allowing students in Japan to travel around schools and attend lessons without having to leave the safety of their homes.

The Herts and Essex High School